I'm seeking some information relating to the F.A.I.R Iside Prestige Tartaruga Gold that I would like to purchase. The gauges available are 12, 16, 20, 28, and 410. According to the specs, only the 12 and 20 are 'proof steel shot'. Apparently, F.A.I.R. uses 'special' steel to keep the wall thickness to a minimum, at least that is the way I interpret. Knowing this, would one be better to purchase either the 12 or 20 gauge. All are fitted with 3" chambers except the 16 gauge. If any can provide any insight here, it truly would be appreciated. I already contacted Jon Hosford for technical info. All replies are welcome

Not related to that specific gun, but I have four FAIR O/Us, and I think they are a great value.  Mine are .410, 28, 16, and 12, all on scaled frames and all extremely well finished.  Fit and finish are comparable to my Berettas and B. Rizzinis.

If I were to consider the O/U, they would have to be new and only:

You must pass up some very serious double guns if you will not purchase used steel.  I own very few O/U guns however my Browning 28/20 Combo gun was purchased from Ray Anthony's private collection, used steel for sure.

Never had one problem with it.

Some of that double gun used steel 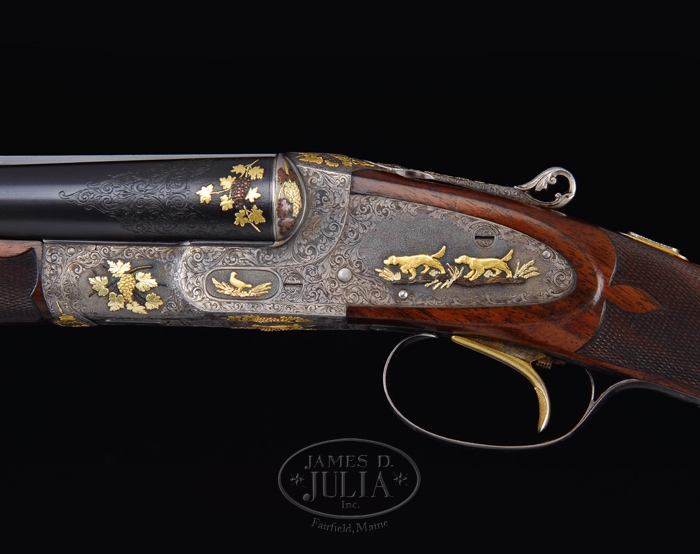 You must pass up some very serious double guns if you will not purchase used steel.  I own very few O/U guns however my Browning 28/20 Combo gun was purchased from Ray Anthony's private collection, used steel for sure.

Never had one problem with it.

Some of that double gun used steel

* I have no intentions, none on purchasing a combo> too much money. That is a very nice piece of steel you display. However, to find such 'used'  items as you show are surely going to be valued at top end. I really care not for O/U's but S xS's are a different story. The climate never changes in trying to acquire a fine item. The fact is, that not many are purchasing these over priced items, for the collector market in this field has diminished greatly. I recently could have purchased the FAIR Iside Prestige Tartaruga Gold (New) for $2000.00 in 12 gauge. The majority of people, if not all on 'Shotgun Forum' steered me away. All said it is 'not' a collectors item. Randy Wakeman has assisted me greatly in this field, as I have taken his advice. FAIR's support is almost non-existent, and the reps' know not anything. I could elaborate more but why bother. I even spoke with Carlo Fiocchi,and the COO of FAIR in Texas  who is merely a snake in the grass, like the many.

* At this point in time and to all the turmoil in the world, along with the many who care not for anything today; nor have any respect or honor for anyone, has diminished  any future endeavors in the arena for me. It is really the end of an era. Thanks very much for your input. I'm out.

So since your original post, did you decide on another brand, model? Did you find something to your liking?

No. I've been performing research for well over a year, especially with the FAIR lineup. Very much disappointed whereas there is 'no' support', none. These people expect someone to purchase sight unseen and when you see an item of interest, "They merely show representations of the item, "Not the real shotgun." This has been ongoing for a while as many are becoming aware or have been abreast of these dubious tactics. If that is the way they wish to play, 'let them die with their goods'.

I have practically given up with FAIR and mostly all who sell firearms. They are of the same breed, trying to deceive the mainstream with their convoluted ways. Not many, if any really know anything of what they're selling. Those trying to move the items are only interested in how much money they can extract from someone. I have proved this point to a majority of gun sellers by continually manufacturing evidence.  Some never respond, some are confused, some know not what to say, and the remainder state; 'That's the price'. We know their thieves for the stipulations in their 'return' policies are outrageous. The fact is, 'they do not wish to have the 'junk' returned. Those with lenient addendums pertaining to the sales of firearms ( certain pieces); are not really worth anything. They stick the people enough with their cheap junk.

I guess I expected different but was only trying to believe in honor and respect in this field. It does not exist, honor and respect are buried, and only the dead remain in trying to amass funds. No, I have not searched for any other brand/s as there are not many arms manufacturers left in the U.S. Europe and its counterparts have really gone off the rails, not only with arms but many other things. They see Americans ready to purchase a shiny object. However, the tide is changing rapidly and they know it. That is the true reason why they act as they do, because there is no alternative left for them, other than to snicker those of little knowledge. I have documented this subject with documents, audio logs, and emails to verify my synopsis. The proof is irreversible. I do not believe that any other has spent as much time seeking all the 'ins and outs', as well as all the lies given by those claiming to have knowledge. They're all liars, hoping to entrap the unsuspecting. Sorry for the long segment but I've just about had enough of these people, all of them. As I said earlier, "I'm out" period. So is the whole "buy new ONLY" schtick.

Pretty much everyone here...maybe with the single exception of you...has bought plenty of used guns, including English and American classics, as well as Spanish, Italian, etc...and been very satisfied.

We collect firearms, so you can hopefully perceive our insight. Surely, there are times where a used firearm may be collectible but those instances remain rare. As to those pieces, as almost being new', there are no qualms on my part. However, the climate is no longer bringing in new buyers; just 'greed' is involved. I care not for this aspect at all. This is what the entire world has conformed to. I just do not care to partake of these people any longer. Please do not berate me for 'not buying used steel'. This was subject of arms being diminished as 'used' was in the pretext of worn or abused arms. Some believe that if it's a Parker, one can ask any price; even if the item is practically junk. Let them keep their Parker's and any other pieces they believe are worth gold. In the end, it means nothing, absolutely nothing. The rules are not rules any longer: those remaining are snakes in the grass. We shall not be part of that darkness, rather we'll stay with Our Eternal Light until we are called back to Him. Not many, if any speak in this way but we say what is true. Thank you very much for your input. It's just too bad what things have become. Yet we praise the Most High each and every day, nonstop. This is the true reward that many have failed to see. Time for prayer. Keep the faith, it is far more valuable than anything in or on this earth.

We collect firearms, so you can hopefully perceive our insight.

The folks that post here on a regular basis would love to know, if for no other reason than to be able to categorize you future contributions.

There are some goofballs among us.

Reminds me of the hatband ravings seen on the Dr. Bronner's soap bottles. Back to his question...SXS guns made her in the good old USA are not many. And when you talk imported guns of this price point I do not think anyone is trying to make a killing on selling one. I think Fair is a solid company, that will service the gun for some time if needed.  Off shore mnf. guns can be problematic. Repairs are performed by a service center not at the factory. One example is Taurus, repairs can have long waits and take more than one try getting it right. You would do well to look at the CZ SXS guns, they are well made Turkish mnf. by HULU and backed by CZ.  Step up several price points to CSMC.  The RBL line is well made right her in the USA. Connecticut shotgun stands behind the guns they sell and repairs are performed by the factory and have very short waits...one to two weeks is the norm.  I own 4 of their SXS guns, RBL-28 two barrel set, three CSMC Fox guns that I really like....(-:     SXS Ohio

I have a FAIR Rizinni Iside in 16g and there is nothing not to like.

Its as much gun that I can appreciate and it is very well balanced between the hands.

I prefer a box lock and this is a good one.

I prefer a box lock and this is a good one.

I am curious why you like box locks better.

I think the lines tend to be cleaner, and they are less prone to be gaudy flashy.

I shoot one of each, but both are pretty low on the flashy scale.